Nichimy’s U.S. office inherits our founder’s vision of “Contribution to the progress of the world through our best technology” and strives to accomplish all of our projects with that spirit.

We have contributed to the discovery of hidden truth through our research. We have made our best efforts to preserve significant historical documents through scanning projects.

Nichimy staff members are working at the U.S. National Archives in College Park and University of Maryland for our projects.

The Gordon W. Prange Collection at the University of Maryland is the archives of Japanese publications that were submitted to the General Headquarters (GHQ) for censorship in 1945 to 1949, when Japan was occupied by the Allied Powers. Professor Gordon W. Prange, who served the GHQ as a chief historian, donated the collection to the University of Maryland.

Nichimy has been engaged in a scanning project for the Prange Collection since 2006. We provide state-of-the-art technology to preserve the valuable collection for the next generation.

The U.S. National Archives and Records Administration (NARA) owns a large number of historical records related to Japan. These include U.S. and Japanese military records during World War II, the records of Occupied Japan after the war, U.S.-Japan diplomatic relationship documents, Japan’s national security documents, Japan’s social and economic records, and so on.

Nichimy staff members go to NARA every day for our research projects. Recently, we discovered documents that show the locations of burial sites in Iwo Jima. We have contributed data to recover more than 11,000 Japanese remains. We also have been engaged in other topics in our research: Battle of Okinawa, Japanese-Americans, Koreans in Japan, and regional history in Japan.

Nichimy has been an expert of document preservation through scanning/camera shooting projects. We have performed scanning projects for national and local governmental agencies, universities, libraries, and independent researchers. 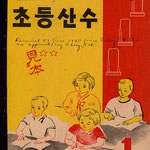 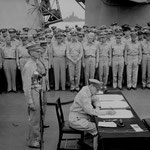 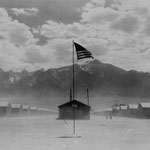 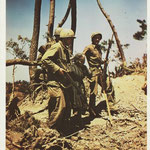 Photograph #C-CPA-1102; “Two GI’s conduct Okinawan woman to the rear. She was found and brought back by a patrol of 3rd Bn., Infantry in the front lines.” Signal Corps Photo #C-CPA-1102, released by BPR 3 Oct. 1945; Record Group of the Office of the Chief Signal Officer, Record Group 111-C; National Archives at College Park, College Park, MD.